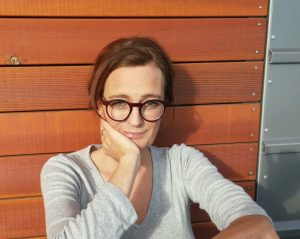 Sigrún Pálsdóttir completed a Ph.D in the History of Ideas at the University Oxford in 2001, after which she was a research fellow and lecturer at the University of Iceland. Since 2007 she has worked free-lance, as the editor of Saga, the principal peer-reviewed journal for Icelandic history, from 2008 to 2016. Her previous titles include the historical biography Þóra biskups (Thora. A Bishop’s Daughter) and Ferðasaga (Uncertain Seas), a story of a young couple and their three children that got killed when sailing from New York to Iceland aboard a ship torpedoed by a German submarine in 1944. Her first novel, and the most recent work, is Kompa (That Little Dark Room).

Sigrún’s work have been nominated for The Icelandic Literary Prize, Icelandic Women’s Literature Prize, The Hagþenkir Non-fiction Prize and The DV Culture Prize. Her book Ferðasaga was chosen the best biography in 2013 by booksellers in Iceland.